East Hampton Veterinary Group is a full-service animal hospital providing veterinary care to pets in the East End. Our long history (over 90 years in operation!) has seen many advances in veterinary medicine and technology, and we’ve adapted and grown every step of the way to deliver the best possible care to your pets.
Request An Appointment

Introduction To Our Practice 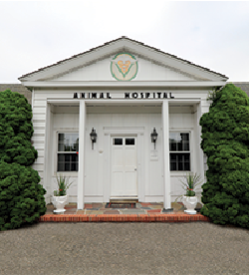 We are a full-service animal hospital dedicated to providing the best pet care on the East End. Serving the pets of East Hampton, NY, as well as surrounding areas, we are a group of trained and compassionate veterinary professionals with a common goal to keep animals happy and healthy.

Originally East Hampton Animal Hospital, our practice opened its doors in 1929 right where it stands today!

Veterinary medicine sparked on the South Fork in 1906. William W. Bennett, a 1906 graduate of Cornell, started practicing on the East End by travelling around the South Fork on horse and buggy providing care primarily for cattle and carriage horses. After Dr. William Bennett passed away in 1941, Dr. Al Pontick became the hospital owner. Being the only animal hospital on the South Fork, the practice welcomed dogs and cats to the practice during the 1940s, which resulted in tremendous growth and steady success. So much so, that by 1954, Dr. Pontick needed the assistance of Dr. Herb French to care for all of his patients.

The next doctor to practice at East Hampton was the son of a local dairy farmer who would work at the hospital after school and on the weekends. Now with a degree, Dr. Gould formed a professional relationship with Dr. Pontick leading to the establishment of Olde Towne Animal Hospital in nearby Southampton in 1965. For several years, both practices functioned as a partnership with Dr. Pontick and Dr. Gould practicing at each facility.

The demand for small animal practices had far surpassed the original horse and cattle patients of the rural East End by the mid 1960s. Drs. Pontick, Gould, and French were doctors of two high-volume practices caring for dogs, cats, farm animals, and horses. Keep in mind, until 1980, between Southampton and Montauk, there were at least six working dairy farms, one thoroughbred breeding ranch, and countless backyard farmsteads!

By the end of the 1960's, the partnership between the two hospitals came to a close. Now, Drs. Pontick and French practiced at East Hampton with a new doctor joining Dr. Gould at Olde Towne. The care needed for large animals did not slow down. East Hampton needed a third veterinarian to help with the busy practice. Dr. Dale Tarr was welcomed to the practice and within two years, East Hampton operated mainly as a small-animal practice while Olde Towne stopped offering services for large animals all together. East Hampton had their hands full!

In the 1970s, a new trend of horseback riding and show horses hit the East Hampton and Southampton areas. By this time, Dr. Pontick only practiced part-time during the summer months. As riding stables and equitation academies popped up throughout the South Fork, Dr. Tom Rothwell joined the team. This new animal trend revived the historical Hampton Classic Horse providing East Hampton with a large horse population to care for. In 1978, Drs. French, Tarr, and Rothwell formed a partnership and changed the name of the animal hospital to East Hampton Veterinary Group.

By the mid-1990s, the practice decided to provide small animal medicine only, and had stopped providing care to cattle and horses. Around this time, Dr. Paul Hollander started practicing at East Hampton Veterinary Group. He retired from practicing full-time in September 2018, after many years of sharing his dedication and talents as a veterinary professional with countless pets and pet owners on the East End. You may still see him around the hospital, as he still sees pets on a part-time basis.

Today, Dr. Kenneth Palmer is the owner of the oldest veterinary practice on the East End. He combines traditional and homeopathic medicine with Chinese herbal treatments and acupuncture to provide leading medical and surgical care.

Located behind Saunders & Associates on Montauk Highway between Buckskill Road and Highway Behind the Lots.

On June 14th, we will be modifying our curbside pet appointment services. Here's what you can expect:

Please note: Medication, food pickups, tech appointments, and drop offs will remain curbside. For those with pet appointments who are not comfortable entering the hospital, we will provide full curbside service.

It is our goal to keep everyone safe. If you are experiencing any symptoms of COVID-19 or have a fever, please do not enter the building. We kindly request that you have a guardian come in your place or reschedule your appointment. Thank you for your continued understanding and support. Stay healthy!

We continue to serve pets in our community. For the most up-to-date hospital information, please visit our Facebook Page.

If you have questions or need further assistance, contact our hospital at 631.324.0282.